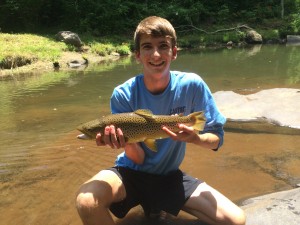 While Casting for Hope proud to claim him has “volunteer of the year” because of the labor we ask him to undertake each year, Casting for Hope isn’t Nick’s only service commitment.  He’s deeply involved in the ministries of First Baptist Church of Morganton and numerous local, regional, national, and international mission projects.

Nick is also highly involved in his school life at Patton High School:  he is an integral member of the cross-country team and the tennis team.  He’s highly active in student government and co-anchors the morning television show–WPHS.

Nick, we can’t say thank you enough for all you’ve done to make Casting for Hope what it is today!